The Peralta Community College District is not compliant with a California state bill implemented March 1, 2017, that requires all single-user toilet facilities to be identified as “all gender,” providing a safe option for not only transgender people, but also for different-gender caretakers, and women who often wait in longer lines to use the restroom.

Assembly Bill (AB) 1732, sponsored by Assemblymember Phil Ting (D-San Francisco), requires that all single-user toilet facilities in “any business establishment, place of public accommodation, or state or local government agency to be identified as all-gender toilet facilities.” The bill was intended to address “problems of safety, fairness, and convenience” by making single-user restrooms available to any person.

There are several types of restrooms on the four Peralta campuses: multi-user, multi-stall; single-user, self-locking; and single-stall toilet with a urinal outside the stall (SSTU). The language of the bill defines a single-user toilet facility as “a toilet facility with no more than one water closet and one urinal with a locking mechanism controlled by the user.” Laney College, the flagship college of the Peralta district, has the largest student population. According to Laney Director of Facilities and College Operations Amy Marshall, Laney’s campus currently has 24 all-gender restrooms. Sixteen of those restrooms are in the Tower building, which houses administration.

Former Laney student Kieryn Darkwater enrolled at Laney College in fall 2017, not long after they started HRT (hormone replacement therapy). According to Darkwater, they struggled to find restrooms to use where they felt safe. The only restrooms they could find were located in the Tower building, but those were far from their classes in the welding department.

“I clocked it: it literally took me 10 minutes to go to the Tower, find the bathroom, and then go back to my class,” Darkwater said. Each floor of the Tower has two all-gender restrooms, but Kieryn and other students noted that if those two were occupied, they would have to try other floors.

Darkwater took it upon themselves to map out the restrooms on Laney campus: the all-gender restrooms, and the single-user restrooms that they thought should be labeled all-gender.

“I talked to anyone who would listen about the fact that our school is not in compliance with state law with regards to the bathroom signs,” they said.

Although an AB 1732 fact sheet from Assemblymember Phil Ting, the bill’s author, said “compliance with the bill is a matter of changing a sign on a restroom door,” Laney College administration has found it more complicated than that.

Marshall said that a combination of factors have contributed to Laney’s delayed compliance with AB 1732.

When personnel at District General Services (DGS) interpreted the law in 2017, they believed that restrooms with a toilet stall and urinal outside the stall were not part of the implementation plan because there was no way to lock the entire room, she said.

According to Marshall, former Vice Chancellor of General Services Dr. Sadiq Ikharo led the effort to promptly switch the signs on restrooms that were not in compliance, such as the single-user restrooms in the Tower. Ikharo was placed on permanent leave in March 2019, replaced by Interim Vice Chancellor Leigh Sata.

“These are our students. So we need signage at all of the campuses and the district office to let people know where they can go to the bathroom.” -Maril Bull, Merritt College landscape horticulture staff assistant

In an effort to provide more options for students on different parts of campus, a multi-stall restroom in the A-building was converted to all-gender, but transphobic graffiti was found on the toilet dispenser. A transgender student, who wished to remain anonymous for safety concerns, said that although this restroom was the closest to their classrooms, the graffiti meant they didn’t feel safe using that restroom. Marshall, who said she was previously not aware of the graffiti, encourages any student who finds offensive graffiti to report it to the business office immediately.

Laney College President Tammeil Gilkerson has advocated to replace the current locks in SSTU restrooms so that the doors can lock from the inside, with the goal of providing access to all-gender restrooms in every section of campus. Marshall said conversion of the SSTU restrooms should be completed in Jan. 2020.

Uncomfortable with being questioned for using gendered restrooms, Darkwater said they stopped using restrooms on campus, which meant they were barely eating or drinking during their at-minimum six-hour days.

“If I had a bathroom in every building that I could go to, my life would be so much easier because then I would feel like I could eat. And I could not starve myself to get an education because that’s what it felt like at that point,” Darkwater said.

“It’s like I am literally starving myself just so I can learn things.”

Darkwater said they are taking time off due to health complications exacerbated by their extreme fasting while on campus.

Marshall said part of the delay in converting additional restrooms is that the whole college is transitioning to “keyless entry doors” which automatically unlock at 7 a.m. and lock at 10:15 p.m. during the semester. The doors must be programmed to allow users to lock the door from the inside in single-user restrooms.

The Peralta district engineers were originally slated to install new locks, but change in DGS leadership and an administrative decision to instead use contractors delayed the project, Marshall said. Later, Marshall found out that installation of the new locks would require additional repairs. The contractors, Opening Technologies, were trained by the vendor on Nov. 15, 2019, to install the keyless entry locks, as they previously were not certified installers.

Merritt College, the largest Peralta campus by acreage, has eight all-gender restrooms, but Landscape Horticulture Staff Assistant Maril Bull said that the restrooms can be hard to find. Bull has a single-user, all-gender restroom in his office, which he said he likes to call “gender-free.” He posted signs on the two gendered restrooms in the courtyard to alert students about the alternate gender-neutral option in his office.

“This new science building, called state-of-the-art, allegedly has not one gender-neutral restroom in it,” he said, which was confirmed by Merritt Facilities Specialist Tara Marrero.

“In this day and age, we have more students with this need,” Bull said.

“These are our students. So we need signage at all of the campuses and the district office to let people know where they can go to the bathroom.”

Of the eight all-gender restrooms, four are in the Q-building, which houses administration. Other than the staff restroom in Bull’s horticulture office, there are two in the Children’s Center and one in the Health Services Center.

In emails obtained by the Citizen, an initial count reported 18 single-stall restrooms on Merritt campus, but that number included restrooms with the SSTU layout and inability to lock the entire room. The lack of self-locking mechanisms raised concerns for student privacy and safety.

Marerro said that Merritt College also interpreted SSTU restrooms to be outside the scope of the bill. She does not know of any plans to change locks to allow for a self-locking mechanism, or to add additional all-gender facilities. The BCC campus, a newer building completed in 2006, has six floors — all-gender restrooms are located on the first, third, and fourth floors. Two of these restrooms, though not locked, have additional signs saying “Employees Only,” and others are tucked within administration offices.

College of Alameda (CoA) has 11 all-gender restrooms, according to Interim Director of Business and Administrative Services Chungwai Chum. The completion of the new Center for Liberal Arts will add an additional four restrooms.

A twelfth all-gender restroom in the D-building has been repeatedly broken into and vandalized and will be out-of-service for the foreseeable future, Chum said. The restroom had been barred following the break-ins, but on Dec. 9, custodial staff found the restroom pried open with the lock forced, the metal bar unscrewed from the frame, and the wire of the automatic mechanism cut. She said the Sheriff has been notified of the break-ins.

Marshall, of Laney College, said that “large transient traffic” that includes break-ins and camping out in restrooms is also a concern for her.

CoA’s restrooms remain with temporary signs, such as the two in the gym building and a staff restroom in the A-building that has both “men” and “all-gender” signs. Chum said DGS has already issued a work order for these restrooms, but she does not know the expected date of completion.

Former CoA Health Services Coordinator Evan Schloss, who served intermittently as an advisor for the CoA LGBT club from approximately 2005 to 2018, obtained free signs for the single-user restrooms in the student center in 2015 because students had indicated interest. Schloss said although only one or two students mentioned the lack of all-gender restrooms specifically, any needs voiced by students are important.

“As far as I’m concerned, if there’s one person, there’s likely more that just aren’t vocal and out about it,” Schloss said.

“There’s a need if even one person expresses that — it seems like an important thing to have on offer.”

In 2015, after changing the signs in the CoA student center, Schloss sent an email urging all Peralta campuses to be proactive about switching from gendered single-user restroom signs to all-gender signs. Emails shown to the Citizen indicate the district administration sent emails to form a task force regarding the all-gender signs in mid-March, weeks after the implementation date.

Bull, of Merritt College, said he wondered why there needed to be a task force for the signage: “I don’t know what they had to say about it, but it seemed kind of ridiculous.” Neighboring Contra Costa College in San Pablo also struggles with full compliance with AB 1732, according to an email from the college’s Building and Grounds Manager, Bruce King. At Contra Costa College, all single-user restrooms in newly constructed buildings incorporate all-gender restrooms, but ensuring older buildings are compliant has proven challenging, much like Peralta’s older campuses.

“This is a more involved compliance issue that involves budget and planning,” King said.

“Senior management has this on their to-do list for future work.”

“The local districts are responsible for ensuring their colleges’ compliance with AB 1732 for their current facilities,” Jimenez said in an email.

Twenty-two percent of California’s LGBT population resides in the Bay Area, according to 2016 data from the Williams Institute at UCLA.

“We’re in the East Bay — we are the sanctuary for the queer trans people. We need to make our campus also that sanctuary,” Darkwater said.

The Citizen is committed to covering the experiences of LGBTQ+ members of the Peralta Community College District. If you have a story you’d like to share, please contact Editor-in-Chief Isis Piccillo at [email protected]. 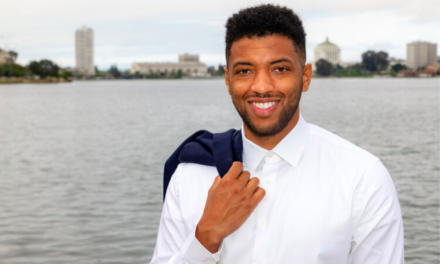