Laney College’s Teach-In Series is gaining traction and relevancy post-inauguration. The Forum was filled almost to capacity on Wednesday, Feb. 15, with attendees sitting along the aisle in the back of the room.

The Teach-In put hundreds of Laney students and faculty in contact with a panel of immigration lawyers and defenders of civil rights with expertise in protecting immigrants and refugees. The panel consisted of three immigration attorneys and Lara Kiswani, the executive director of Arab Resource & Organizing Center (AROC).

The event organizers, panel members, and other speakers volunteered their time to address the rights of immigrants, and the threats they face.

Just as Teach-Ins over the past few semesters have been doing, this event provided a crucially relevant education for those on campus who want to protect their rights and/or the rights of others.

This Teach-In provided literature from the National Immigration Law Center, National Immigrant Justice Center, and the ACLU, which offered specific advice about Deferred Action for Childhood Arrivals (DACA), knowing your rights, and how to interact (or not interact) with Immigration and Customs Enforcement (ICE).

DACA is an American immigration policy put forth by the Obama Administration in 2012, which allows certain immigrants who arrived in the U.S. before 2007 and are at least 15 years old certain rights,. These include work permits, social security numbers, non-deportation, and re-entry into the U.S. if traveling abroad.

Atty. Gen. Jeff Sessions stated during his confirmation hearing that ending DACA “would certainly be constitutional.”

This creates a dilemma for immigrants seeking the benefits of DACA’s protections. Panelist Rachel Williams advised those who had not yet applied for DACA not to apply at this time of uncertainty, lest their information become susceptible to unwanted attentions.

“we need to all come together, that’s the only way we’re going to be able to protect all of our rights”

The planning committee ensured the audience that they would not be filmed or photographed, in the interest of their safety, and that they could speak with the panelists after the panel discussion.

Panel members were able to repeat key messages in English, Spanish, and Farsi, and to invite those who speak those languages to converse with them after the discussion.

Dr. Kimberly King, a psychology instructor at Laney College, and Andrea Calfuquir, an immigrant student, were MCs for the Teach-In, and they had a message for students who felt vulnerable.

“Don’t be afraid of your teacher — they got you,” Calfuquir said. Dr. King supported that message: “Me, as a citizen, I am going to protect, as best I can, your rights — but we need to all come together, that’s the only way we’re going to be able to move forward to protect all of our rights.”

A recurring theme in the Teach-In series is unity — that those who work together are stronger than those who try to stand alone. The Teach-Ins offer a way into the support that is available in the Laney community.

AROC’s Kiswani listed many helpful organizations, to make sure the audience understood “the breadth of support” that it has, including the African Advocacy Network, Asian Americans Advancing Justice, Asian Pacific Islander Legal Outreach, La Raza Community Resource Center, and more.

Before the legal experts began to dole out advice and resources for those in need, Marla Leech, a Laney College film and sound production instructor, asked the audience to each place a hand on a neighboring shoulder.

She then asked everyone to look around “at the amazing, wonderful faces of humanity we have here” filling the Forum, some wrapped in hijabs, some light and some dark, and she told the audience that they were all connected, just a shoulder away.

Oakland is a Sanctuary City, which means it has adopted a policy of protecting immigrants by not prosecuting them for breaking federal immigration law, and that it will allow immigrants, legal or not, access to city services.

The Teach-In planning committee is holding a meeting on Thursday, Feb. 16 to discuss ways to establish Laney College as a sanctuary campus.

Sarah Carpenter is the Tower Assignments Editor. Contact her at SarahisaCarpenter@gmail.com 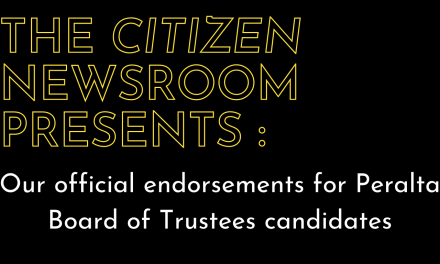 Rousing welcome for ‘Year of the Boar’