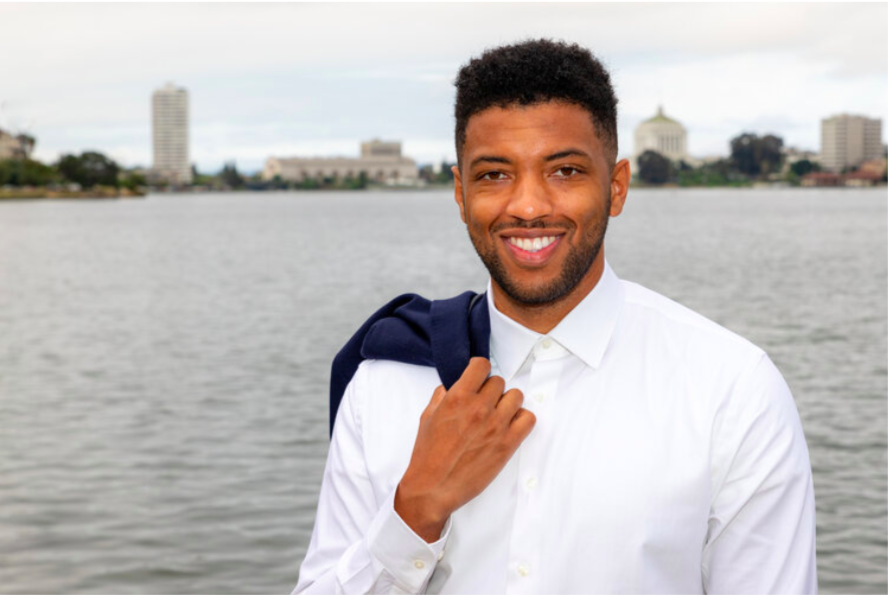 Kevin Jenkins is running for the Area 2 seat on the Peralta Community College District Board of Trustees unopposed. (jenkinsforperalta.com)

When speaking about his son, 34-year-old Kevin Jenkins lights up.

At the beginning of a Zoom interview with The Citizen, the Area 2 candidate for the Peralta Community College District Board of Trustees was briefly occupied with getting his son settled. The father-son connection was clear from the brief exchange.

“I focus most of my time on my son — just making sure that I’m doing a good job at raising him and raising a productive member of society.”

Kevin Jenkins is a lifelong Oakland resident and Peralta alum running unopposed for the Area 2 seat on the board of trustees.

He will be joining the board as a continuation of his career in local government that began with an internship with Alameda County Supervisor Keith Carson in 2012.

“That’s when I got interested in giving back and service,” Jenkins said.

Jenkins was a Peralta student himself. He enrolled after graduating from Oakland Senior High School. He credits Toni Cook, dean of special programs at College of Alameda, with fostering his interest in politics, especially on a community level.

Jenkins was eventually accepted to Louisiana State University, but with no options for financial aid, he felt the best “bang” for his buck was going to a state school. Jenkins went on to receive a bachelor’s in urban studies and planning from San Francisco State University and a master’s in public administration from Cal State East Bay.

His current position is at Building Opportunities for Self-Sufficiency (BOSS), a Berkeley-based nonprofit with stated values of promoting housing justice and addressing “the root causes of poverty and homelessness.”

“I do a lot of government affairs work, advocating on behalf of organizations for government funding, government policy changes and ensuring that the voices of the nonprofits are heard,” Jenkins said.

Jenkins recently stepped down in Aug. from his position as Public Health Commissioner for Alameda County, a title he held for four years. The tail end of his term was spent watching the impact of the COVID-19 pandemic.

“It’s an amazing responsibility it gives you. And it’s scary that you have insight to more information. You have insight to the data: what’s going on, how we’re doing. Thankfully Alameda County is doing an excellent job. We’re rolling on the side of caution,” Jenkins said.

Jenkins thinks that local government and community colleges will be instrumental in COVID-19 recovery.

Jenkins also addressed how local government and community college will be important to addressing and mitigating inequalities.

“With the social justice uprising that we have in this country, I think the local governments implementing policy changes to reflect community values will also have a major impact in 2020 and going forward.”

Oakland has been at the forefront of progressive action for decades. Jenkins said that “offering emergent career paths to disadvantaged communities” is a way to further the causes of social justice.

“Partnering with businesses that come here and ensuring a pipeline to employment for people that traditionally couldn’t get employment,” are specific ways to achieve this goal, Jenkins said, as well as “working with our reentry community, who a lot of times are barred from employment.”

When asked about concrete next steps he has in mind for Peralta’s future, Jenkins was visibly optimistic about the next four years. “I’ve been looking at other school districts that are providing housing,” he said.

“I realized that it’s outside of the scope of the mission. But at one point in time, Blockbuster had a mission and they stuck to it, right? And now we all use Netflix instead,” Jenkins said.

Concerning the larger scope of the work he feels needs to be tackled, Jenkins reflected on his passion for the local community.

“We need to find out ways to help keep people in Oakland. And I think the community college can be a resource for that. We can’t affect how rent changes are going to go, we can’t affect the housing market. But what we can affect is a person’s ability to change tax brackets,” Jenkins said.

The Area 2 position on the Board was previously held by Meredith Brown. Brown was elected to the Board in 2012 and is stepping down after two terms.

To learn more about Kevin Jenkins, visit his website: https://www.jenkinsforperalta.com/about

Convention center renovations set to begin-Construction on the Henry J.