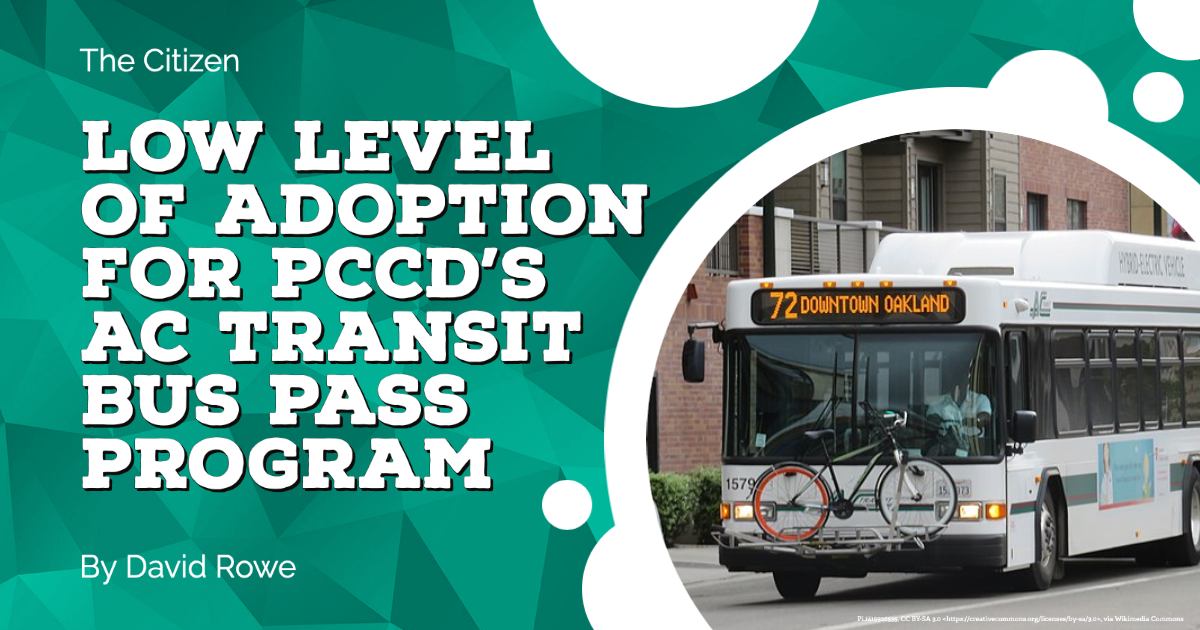 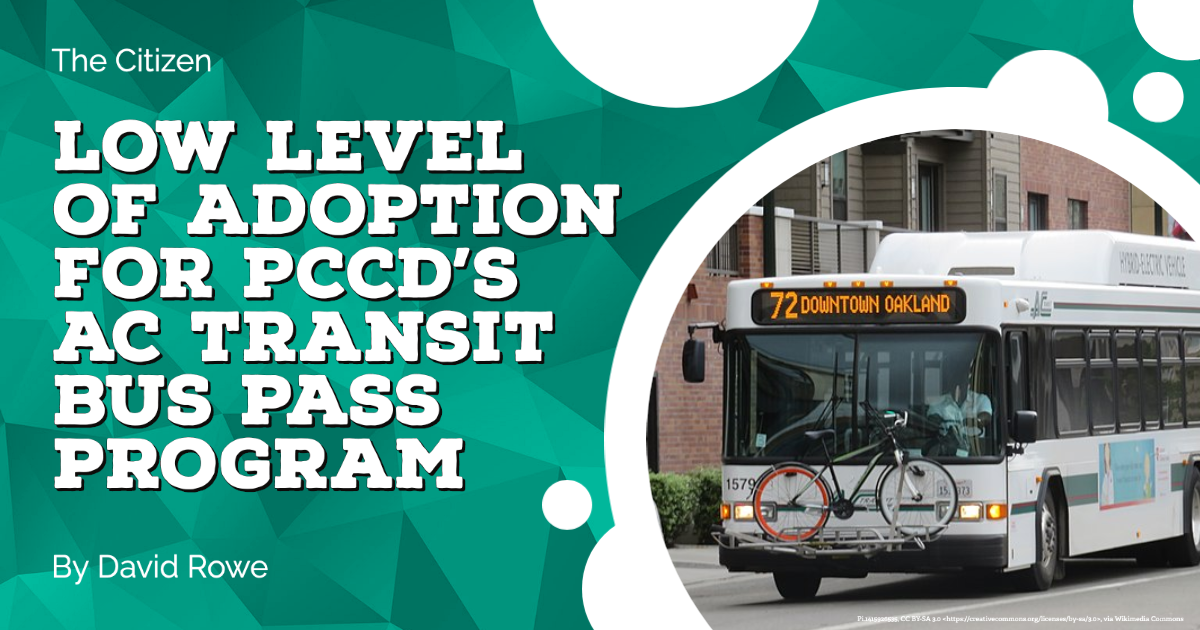 Despite support from the Peralta students who voted in an April 2022 election for reinstatement of the AC Transit EasyPass program, only 31% of students being charged for the pass actually claimed one, according to district statistics.

All students taking six or more credits at a Peralta Community College District (PCCD) campus are charged $42.88 per semester for an EasyPass, which provides unlimited local and transbay bus trips on AC Transit.

A total of 10,412 students met that requirement for the Fall 2022 semester, according to Ne’Shawn Dixon, Staff Assistant in the Peralta Office of Academic Affairs. Of those eligible students, Dixon said just 3,255, or 31%, claimed a new EasyPass card. This figure does not include returning students who reactivated their EasyPass cards, Dixon said. She was not able to provide a specific number of returning students who took this action.

The 31% utilization figure actually represents an improvement from the 23% of eligible students who claimed an EasyPass in the Fall 2019 semester. During that semester, the 3,058 students with an EasyPass took a total of 77,429 rides,  an average of 25.3 rides per student, Dixon said.  The district paid AC Transit $1.4 million for the Fall 2019/Spring 2020 semesters, according to district records. The EasyPass program was not renewed after the Spring 2020 semester due to the pandemic.

The Peralta Community College District Board of Trustees approved spending $892,921 to renew the EasyPass program for the Fall 2022/Spring 2023 semesters at its Nov. 15 meeting – this represents a cost reduction of $539,357 from the previous contract with AC Transit due to the shrinking pool of eligible students.

Students are not able to opt-out of the EasyPass program and are not eligible for a refund unless they fall below the six unit threshold before the deadline to drop regular session classes, according to Dixon.

An exception to this policy is made for special needs students, Dixon said. “Students with a disability pass or program which precludes the student from using the bus are exempt,” she explained in an email to The Citizen. Disabled students who are charged for the EasyPass can “submit a transportation fee waiver with supporting documentation,” Dixon said.

Nathan Failing, a Counselor/Coordinator with Student Accessibility Services (SAS) at Laney College, told The Citizen that “many of our students utilize AC Transit,” and “very few” use paratransit. Failing said he had “not heard of any students having problems needing to get a refund” since many took advantage of Laney’s “Fall is Free” program and were not required to pay fees for the Fall 2022 semester.

“I think we will see this concern come to fruition in Fall 2023,” he said in an email to The Citizen.

Randi Cross, a journalism student at Laney College and staff writer for The Citizen, said she became aware of the EasyPass program at the start of the Fall 2022 semester, when she saw a notification on Canvas, the learning management system used by PCCD. According to Cross, when she went to pick up her student ID at the Laney Student Center, she was directed to the cashier/financial aid office to get her EasyPass. Upon arriving, the cashier told her the EasyPass “would not be ready for another two weeks,” and that she would “need to come back.”  Cross ultimately received her EasyPass and uses it 4-5 times a week.

Jillian Jones Grant, also a Laney journalism student, was denied an EasyPass when she initially visited the cashier/financial aid office due to an outstanding balance on her account. Once that was resolved, she received an EasyPass and uses it 10-20 times a week.

Both Cross and Jones Grant agreed the pass would be more useful if it included BART in addition to AC Transit.

Dixon says the district is working with AC Transit to better promote the EasyPass program. Posters and pamphlets have been distributed to each campus in addition to ads on video screens, according to Dixon. She said the district and AC Transit are “collaborating on outreach/promotional materials for the upcoming Spring 2023 semester.”

Students at UC Berkeley, where the EasyPass is also offered, pay even more than Peralta students ($95 per semester) but are also able to use the pass on the Bear Transit shuttle service. A $32 campus fee mandate for financial aid is also included in the fee, according to the UC Berkeley website. Students in certain graduate and online only programs are exempt from the fee. Clipper Cards loaded with the FastPass are distributed to all incoming UC Berkeley students at orientation, according to the site, whereas Peralta students must visit the cashier’s office of their home campus to claim one.

The Citizen asked Tom Rubin, Vice President of the Alameda County Taxpayers Association and a former public transit executive for his opinion of the Peralta EasyPass program. Crawley said this type of program is very standard for colleges and universities across the country and the 31% participation rate is not unusual. The transit agencies promote the cost-saving benefits for the students who use the pass while the “vast majority of students use it very seldom or wouldn’t be caught dead using it,” Rubin said.  Some colleges increase participation by having the student ID card double as a bus pass, he added.

More information on the Peralta EasyPass program can be found here.

Note from the Managing Editor: While two staff members from The Citizen were interviewed for this article, neither had any part in researching, writing, or editing its content.

From Oakland to Washington 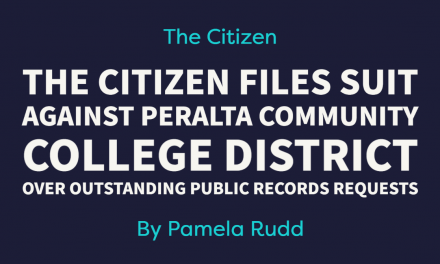