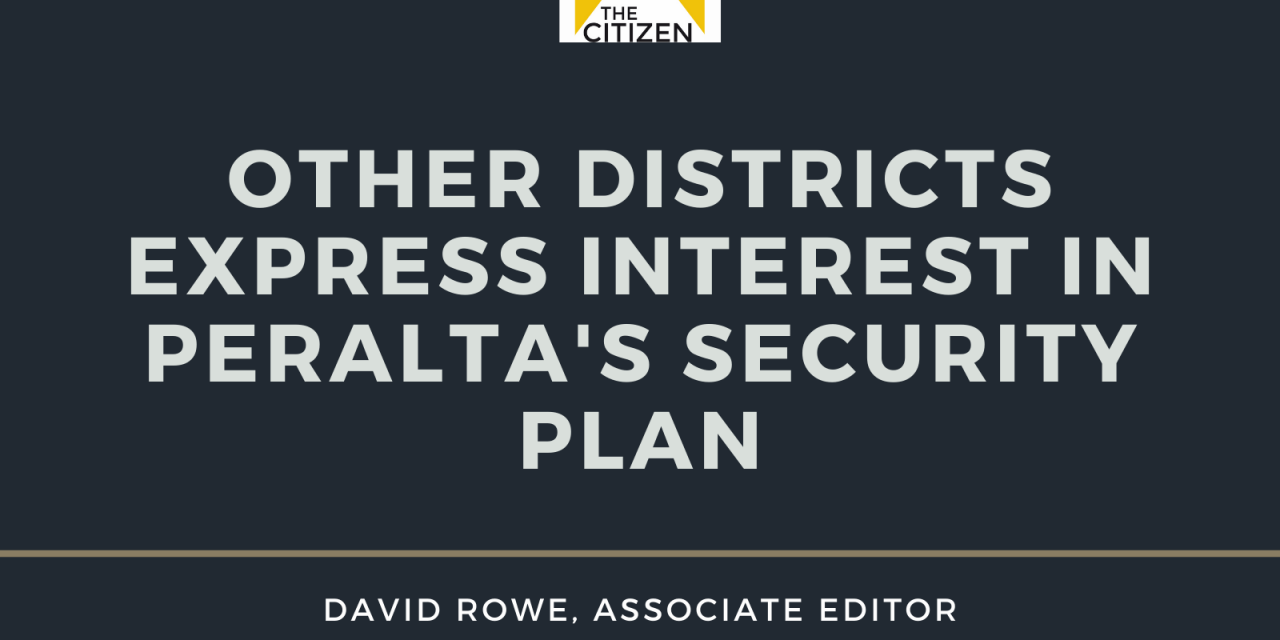 But are not yet ready to replicate it, most still rely upon their own police forces or local law enforcement 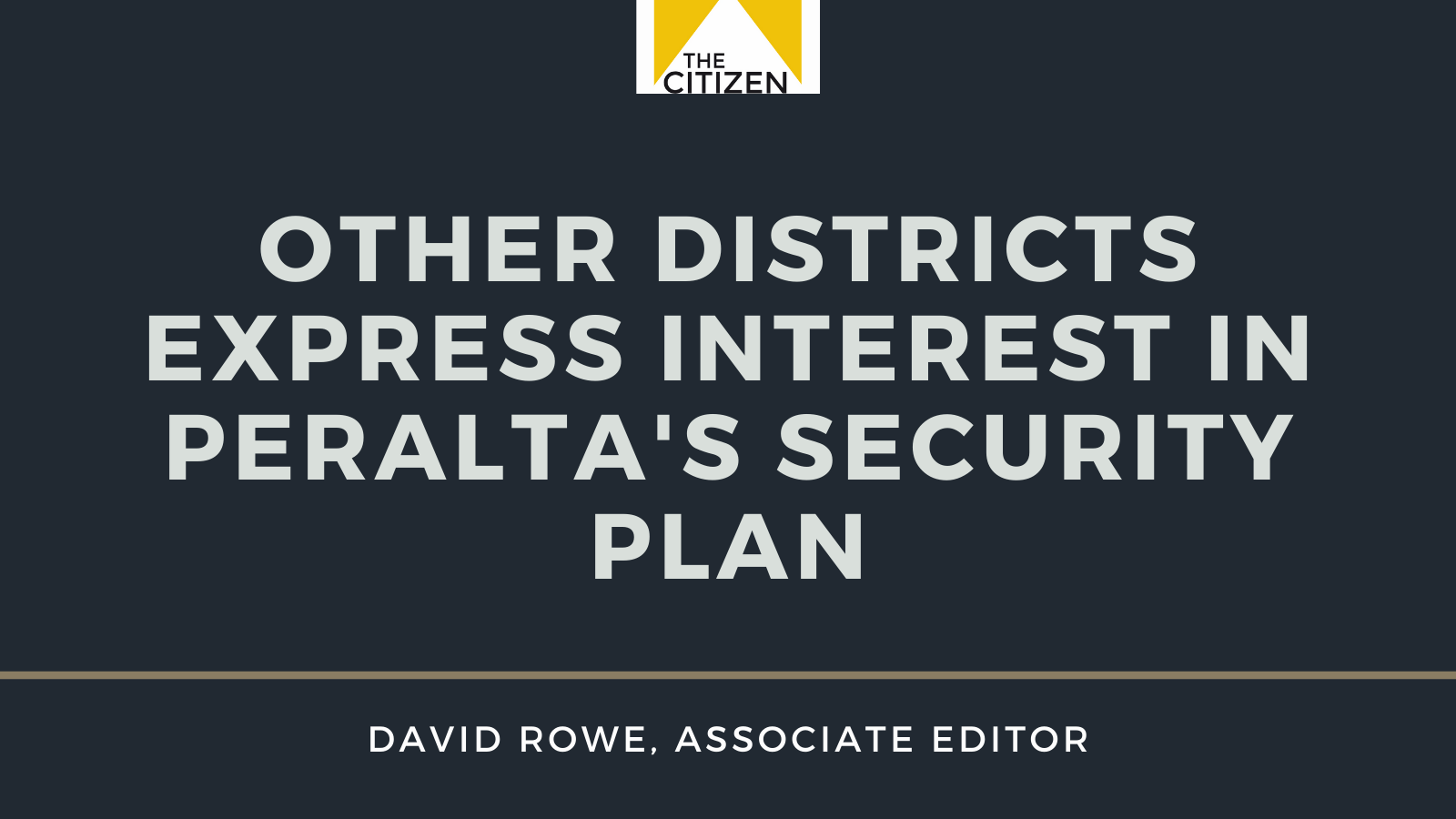 The Peralta board of trustees knew they were taking a bold and historic step last December when they voted to end their long-standing contract with the Alameda County Sheriff’s Office (ACSO) and approve the contracts for four unarmed, community-based security firms to replace them.

Due to licensing issues never officially confirmed by the district, only two of those unarmed firms — A1 Protective Services and Marina Security Services — are currently working with the district. The Citizen filed a California Public Records Act (CPRA) request with the Peralta district last November seeking more information on the selection process for the community-based security companies. To date, the district has not yet provided this information, even though state law requires a response within 10 business days.

Mark Johnson, Peralta’s executive director of marketing, communications & public relations, told The Citizen that since the December vote, Peralta has received multiple inquiries from other colleges about the district’s model. As of now, however, no other community college district in California has followed in Peralta’s footsteps, according to the results of research conducted by The Citizen. 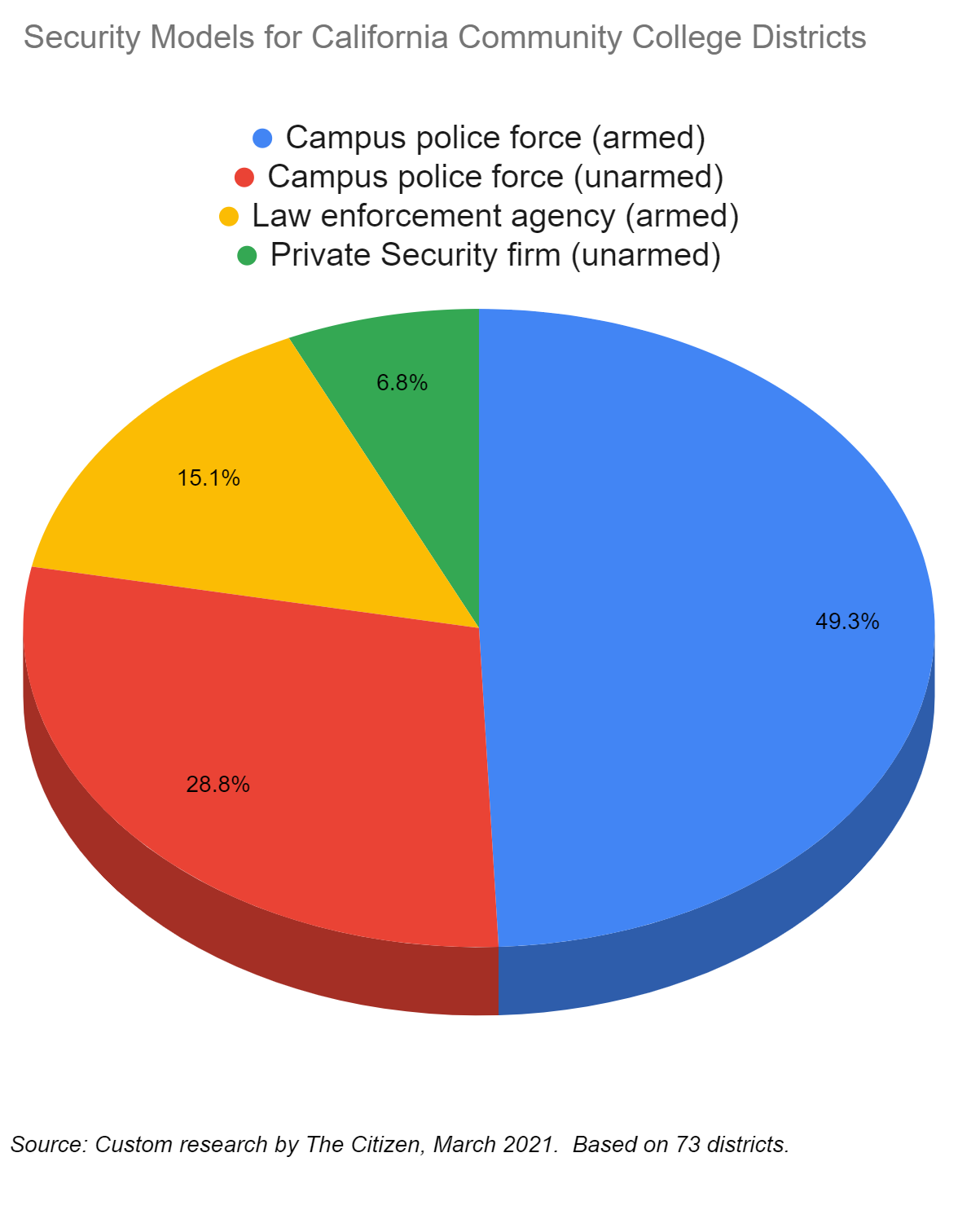 The mandate for community college districts to rethink their security and policing policies comes straight from State Chancellor Eloy Ortiz Oakley. In a “call to action” webinar on June 3 of last year, just nine days after the death of George Floyd at the hands of Minneapolis police, Oakley called for a “systemwide review of police and first responder training and curriculum” as one of six priorities.

A guest column published this week from Marty J. Alvarado, Executive Vice Chancellor for Educational Services and Support, reiterated “that our approach to campus policing and our training of law enforcement cadets promote our commitment to diversity, equity, and inclusion.”

While Alvarado commended three colleges for their efforts (El Camino, Rio Honda and Santa Rosa), she did not mention the Peralta district by name.

Experience of other districts

Los Angeles Community College District (LACCD), the largest district in the state with nine colleges and 140,000 students, was faced with a nearly identical decision as the Peralta district in mid-December 2020. The LACCD board of trustees approved a short-term extension of its long-standing contract with the LA County Sheriff’s Department rather than switching to Allied Universal Services, a licensed private security firm providing unarmed guards.

Following the LACCD board’s decision, Deputy Chancellor Melinda Nish hired consulting firm Hillard Heintze, which is currently conducting a comprehensive assessment of the district’s security program. The findings from that assessment will be considered by the LACCD board in deciding whether to further extend its contract with the LA County Sheriff, which is up for renewal in June.

Jeff Hicks, an English professor at Los Angeles City College and Secretary of the Academic Senate, told The Citizen that “so far, the District hasn’t contacted any faculty or students as part of any assessment of our feelings about the Sheriffs on campus.” Hicks also pointed out that “the Sheriff’s union has been very well organized in our District, far more organized than the faculty union.”

Sofía Zaragoza, ASO Club Council President at Pierce College, also confirmed to The Citizen that she has not yet been contacted by either the LACCD or Hillard Heintze as part of the security assessment.

The LACCD decision was further complicated by the shooting death of Andres Guardado, an 18-year-old community college student, by the LA County Sheriff’s Department on June 18, 2020. Seven months after the incident, an inquest conducted by a retired judge failed to shed any new light on the shooting, unable to receive testimony from the deputy who fired the fatal shots or the sheriff’s detectives who investigated the case, according to the Los Angeles Times.

The other 71 community college districts in the state either rely upon local law enforcement agencies or private security firms for security or have their own police forces, based on The Citizen’s research.

Both the PCCD and LACCD had their own dedicated police forces prior to outsourcing campus security to their respective sheriff departments. Peralta decided to disband its force when Lt. Herbert Stovall was shot and killed at Laney College by a suspected car thief in 1995. Stovall was a 21-year veteran of the Peralta police department and was just nine months away from retirement.

Based on The Citizen’s research, 57 of California’s 73 community college districts (78%) still have their own dedicated police departments. Of those 57 departments, 21 are unarmed with the remaining 36 having at least one armed officer on staff. Eleven districts, including LACCD, rely upon local law enforcement agencies. Five districts, including Peralta, rely upon unarmed private security firms. The Compton Community College District is temporarily using Securitas, a private security firm, while it rebuilds its campus police department.

Viewed from another perspective, 26 of the 73 districts (36%) use unarmed security (either with their own police department or through private security firms) while 47 (64%) rely upon armed security officers (either through local law enforcement or their own armed police force).

While Peralta is not unique in using unarmed security officers, it remains the only district to switch from an armed to an unarmed approach in the wake of the Black Lives Matter movement of last year.

The Citizen did not find any other districts currently using armed officers considering a change to an unarmed, community-based approach.

In an email to The Citizen, Chief Jose Flores of the State Center Community College District (SCCCD) in Fresno seemed to echo that sentiment. “Since initiating a police department, the SCCCD Board of Trustees has not considered unarmed police force,” Flores said.

Flores pointed out that the armed officers in his district are supported by students working as unarmed District Service Officers. Their role, according to Flores is “to observe and report and serve as ambassadors of the police department with the student body.”

There are also few, if any, examples of districts moving from an unarmed approach to one with armed security personnel. Bakersfield College, part of the Kern Community College District, announced it was hiring a single armed security officer in March 2019 to supplement its unarmed security team and protect the campus from “active shooters.” When The Citizen followed up with Christopher Counts, Head of Security at Bakersfield College, he said the plan “never materialized and we are still an unarmed security department.” De Anza College in Cupertino used to have unarmed security officers but when it merged with Foothill College in 2001, the combined Foothill-De Anza College District Police force was armed and remains so today.

Smaller districts face greater challenges from a security perspective, given their limited budgets and resources. The Mendocino-Lake Community College District, for example, has just two unarmed security guards to protect its single campus, according to Superintendent/President Timothy Karas, the former President of College of Alameda. For situations requiring an armed response, Karas said the district calls the Mendocino County Sheriff. No changes to the safety plan are being considered at this time, according to Karas.

At the other end of the spectrum, more affluent districts like San Mateo, which includes College of San Mateo, Canada College, and Skyline College, publish an org chart showing its extensive and multi-layered police force under the command of Chief Bill Woods.

The Citizen also asked about how districts respond to security situations requiring a mental health response. The Peralta district plans to hire four part-time mental health specialists this summer who will be embedded into the unarmed security teams, according to Johnson.

The Los Angeles County Sheriff’s Department launched an innovative program in 2020 called HEAT that partnered officers patrolling the community college campuses with mental health clinicians. Only two such teams were formed prior to the pandemic, according to Campus Security Magazine. Unfortunately, the HEAT program was placed on hold at the end of last year, according to the Sheriff’s Department, when the scaled-down short-term LACCD contract extension went into effect.

Chief Flores reports that the State Center Community College District does “not have any mental health specialists embedded in our force, but officers have access to the professionals in psychology services at the colleges, Fresno county mental health crisis workers, and Fresno police mental health officers.” If none of these resources are available in a given situation, Flores says “the officer handles the call on his/her own based on training and experience.”

At Mendocino College, Karas told The Citizen “if someone is in need of mental health services or other services, they are referred to the appropriate college department.” If responding to a specific incident, Karas says, “we would make the request through the county sheriff office or fire department.”

At Monterey Peninsula College, “the response can vary widely, depending on specific circumstances” according to Suzanne Ammons in the college’s administrative services department. If a student’s behavior represents “a physical imminent threat to themselves or to others, this generally constitutes an emergency wherein 911 should be contacted. If a student provides indications that they are in need of personal counseling services, the District’s Student Health Services provides personal counseling services through the clinical supervision of a licensed marriage and family therapist.”

“We need counseling, we need support for our students, we need a place for them to go and talk and receive help and right now we are very under-resourced in that area,” Oakley said in response to a question from The Coast Report, the student newspaper of Orange Coast College in Costa Mesa.

A Breakdown of Campus Security at California Community Colleges: 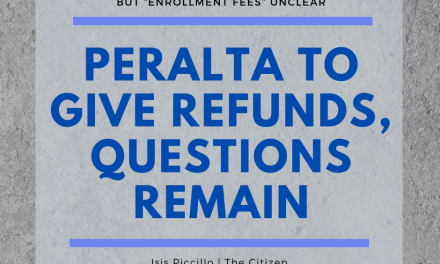 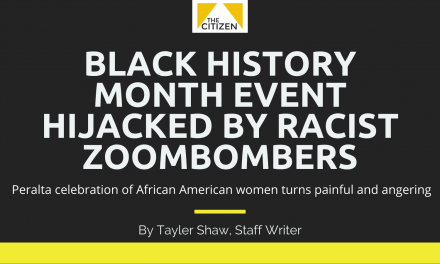 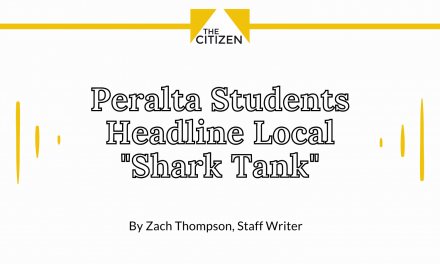