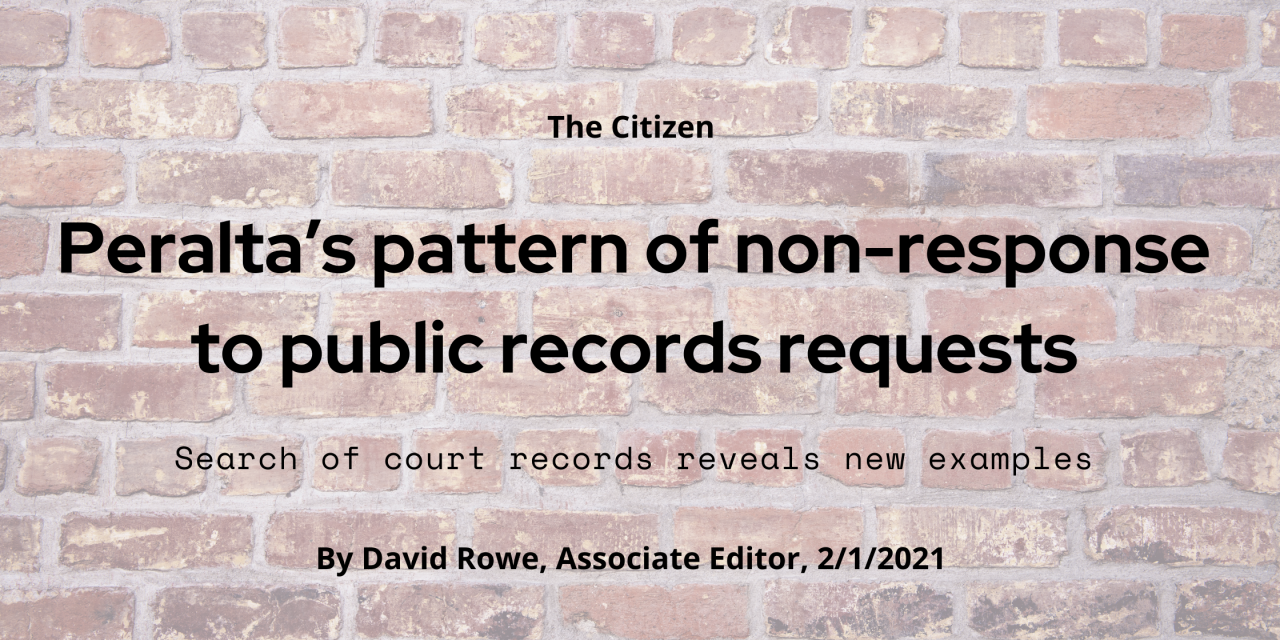 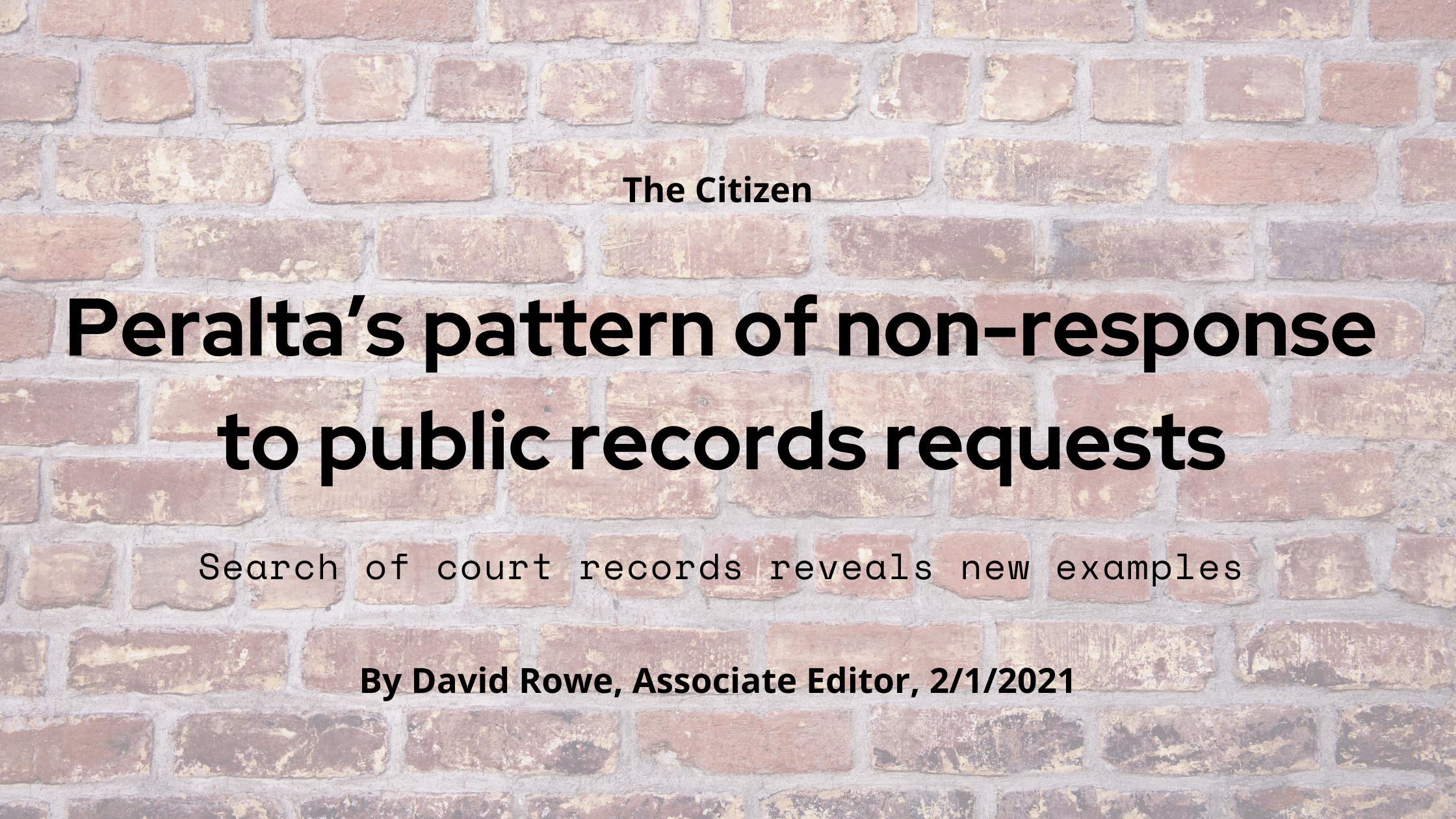 Newly uncovered court documents and correspondence made available to The Citizen by a former district employee suggest the Peralta Community College District has engaged in a pattern of delay and noncompliance for California Public Records Act (PRA) requests.

California public agencies, including community college districts, are legally required to respond to these requests within 10 business days, a point reinforced by California Community Colleges Chancellor Eloy Ortiz Oakley in a recent teleconference with student journalists.

The Citizen submitted a PRA request on November 19 seeking information related to the selection process of the four community security firms designed to replace the Alameda County Sheriff’s Office (ACSO). As reported in a January 12 article, no records have yet been received.

Jeff Heyman, former Peralta executive director of public information, communications & media and a recent candidate for the Area 1 seat on the Peralta Board of Trustees, provided The Citizen with copies of his correspondence with the district regarding PRA requests he submitted.

Here are the details of each request:

Heyman filed two public records requests with the district. The first on August 23, 2020 sought information related to Peralta’s Retirement Board and Peralta’s OPEB (Other Post-Employment Benefit) bonds. The second, submitted on December 5, 2020, requested communication and records related to the November 2020 election in which Heyman was a candidate for the Area 1 trustee seat.

Heyman received a swift acknowledgement of his first request from Mark Johnson, executive director of marketing communications, & public relations for the Peralta district. Johnson said he was passing the request along to legal coordinator Brandi Howard and she would be the point of contact.

Three weeks later, on September 18, Howard provided the district’s “formal response.” Rather than providing the records Heyman requested, however, the response stated “the District does not yet know if it has a record or records that are responsive to this request.” The district promised to provide Heyman with records “as they become available” through December 31, 2020. The response also included links to publicly available documents on the Peralta site.

When no records were received, Heyman followed up with e-mails to Interim Chancellor Carla Walter on October 23 and November 19. He closed the November 19 correspondence by saying “the District continues to ignore its own stated policy on good governance and transparency. I am, therefore, left with no recourse in seeking the requested records other than to consult with legal counsel concerning a possible lawsuit against the District.”

Walter did not respond to either message, but on November 19 Howard sent Heyman an email stating “records responsive to your request will be delivered to you this evening.” Despite the fact that nearly three months elapsed since Heyman’s initial request, Howard stated “the current administration at Peralta complied with the Public Records request.”

It would be another two weeks before the records were actually delivered on December 3. They came not from Howard but from Garcia Hernandez Sawhney, an outside law firm retained by the district. A paralegal with the firm sent a total of four documents, half of which dealt with the Citizens’ Oversight Committee, a subject not included in the PRA request.

In his response to the law firm, Heyman said he “finds it inconceivable that the nine members of the Peralta Community College District’s Retirement Board, which oversees some $225 million in public funds, only sent or received four electronic or written communications in the two and a half-year period covered by my PRA request.”

Heyman is still waiting for a response to his second public records request, filed nearly two months ago. He sent a follow-up note to Walter on January 14, 2021. In that correspondence, he noted “Peralta has not only broken the law regarding my PRA requests, but these violations are a pattern of instances where the District has refused to answer other Public Records Act requests.”

Eng submitted her initial request for records on August 28, 2020 to Channelle Whitaker, Peralta’s Interim Vice Chancellor for Human Resources. Eng sought all records related to discrimination and workplace abuse complaints she filed while working at Peralta in 2018. She also requested documents related to a 2019 complaint accusing her of “interrupting business operations.”

When no response was received, Eng sent a second request on September 18, 2020 to Walter. When the second request was also ignored, Eng filed a petition with the Alameda Superior Court on October 26, 2020 through her attorney, Stephen F. Henry.

In response to an email inquiry from The Citizen, Henry revealed on November 18 that he “did receive a belated, incomplete response from Peralta and have sent them a further request for public records.” Henry has not responded to subsequent requests from The Citizen for updates on the status of his case. A case management conference is scheduled for March 26, 2021, according to a court records search of the Alameda Superior Court website.

Libit was looking for correspondence and contracts between Laney College and the producers of “Last Chance U,” the widely-viewed television series documenting the Laney Eagles football team. He also requested any email correspondence between Laney football head coach John Beam and the director and producers of “Last Chance U.” Libit planned to use the information for an article on The Intercollegiate website.

Libit received a response from Howard on January 21, 2020 saying she would respond to his records request. Seven months elapsed without further communication from Peralta, despite “numerous follow-up messages” left by Libit, according to the petition.

Libit was finally able to connect with Howard again on September 19, 2020, according to his court filing. Following a brief phone conversation, she sent him an email stating “the requested records are being gathered. I will include correspondence with official timeframes. This will be better for your tracking/expectancy.”

When no information arrived, Libit’s attorney, Roy S. Gordet, sent the district a letter on October 22 threatening to file a court petition if the documents were not provided. Once again, the district did not respond. Gordet filed a petition with the Superior Court of Alameda on December 10, 2020 on behalf of Libit, a full 11 months after the initial request was submitted.

Libit and his attorney were not available for comment regarding the current status of the case but a case management conference is scheduled for March 12, 2021, according to a court records search of the Alameda Superior Court website.

Tip of the iceberg

There is a possibility of more unanswered or pending information requests to the district as they have not resulted in legal action as a last resort. In an effort to determine the scope of this pattern, The Citizen filed a PRA request with the Peralta district on November 18, 2020. It requested a “list of all Public Records Requests submitted to the Peralta Community College District over the past 12 months to which responses have not yet been sent.” To date, no such information has been received from the district.

When asked for the district’s response, Johnson sent an email to The Citizen on February 1 with the following statement: “The District is aware of recent challenges in fulfilling public record requests, particularly during the COVID-19 pandemic where many employees are working remotely. The District is committed to responding to PRA requests as per the law. To that end, the Chief of Staff’s office has instituted recent changes. Public records requests are now being input and monitored through a tracking system (the same one used successfully for tracking contracts), in order to track the process, improve communication, and ensure timely completion of requests.”

With reference to the cases of Eng and Libit, Johnson said “the District has issued fully compliant responses to the PRA requests sent to PCCD by each of the two parties who have filed writs.”

Regarding Heyman’s PRA requests, Johnson stated that “the District has issued a fully compliant response to Mr. Heyman’s first PRA request. The second PRA request is still in process.”

WOTQ — Why is it important for everyone to understand Black History?