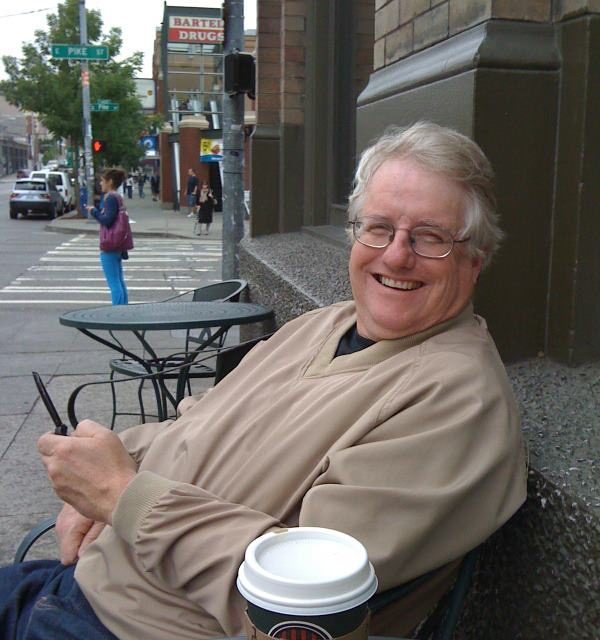 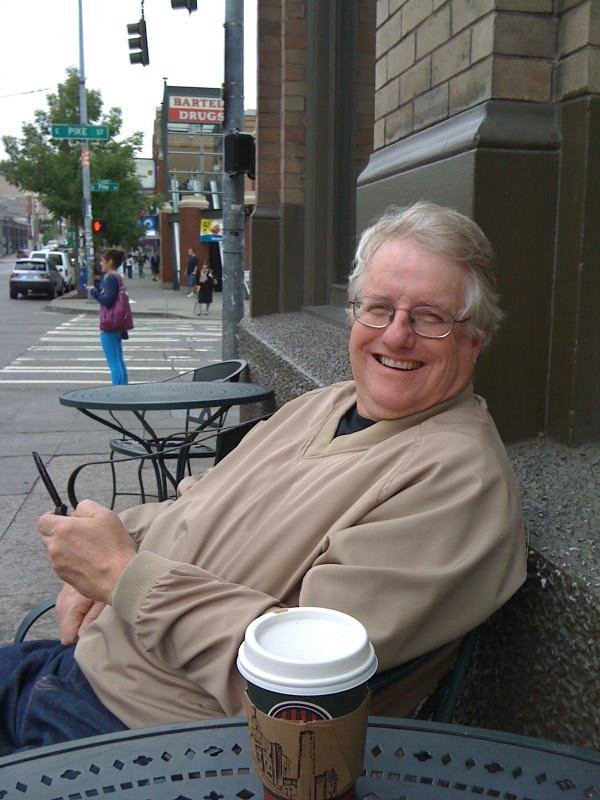 Scott Strain sits happily with a cell phone in hand at Tully’s Coffee Shop in Seattle, WA in 2005. (Photo Courtesy of Mollie Brown)

The Laney College community is in mourning as longtime journalism instructor Scott Strain died suddenly on Sept. 25. He was 70.

Strain was a long-serving member of the Peralta community and was a mentor and friend to a long line of journalism students, who credit him with inspiring their enthusiasm to be reporters.

Mollie Brown, Strain’s daughter, described him as an attentive father who was dedicated to his family. 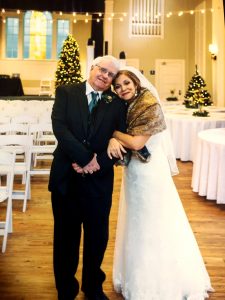 Scott Strain stands beside his daughter Mollie, at the day of her wedding on December 29. 2018. (Photo Courtesy of Mollie Brown)

“He had a lot of wisdom and he tried to give me as much knowledge as I could handle to get through life,” Brown said.

“Even after my parents’ divorce, [nothing] ever stopped him from being a part of my life in any way he could.”

Strain championed Brown’s passion for ballet, serving as the house manager throughout her time at the Berkeley Ballet Theater. He created a welcoming environment for guests on and off the stage, in addition, Brown boasted he never missed a “Nutcracker” performance.

Strain triumphed over his challenges and made the most of every opportunity to care for his daughter, despite his physical disabilities.

“I went to elementary school in Hayward and he didn’t drive. He would pick me up from school taking the bus and BART, and take me to dance class,” Brown said.

“He would hobble all the way out there, and come and get me to go home.”

Brown recalled some of her most cherished memories as being simple ones: getting Fenton’s ice cream and going to Fairyland with her father and her eldest son, Lincoln. 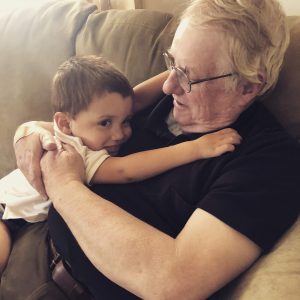 Scott Strain tightly holds onto his grandson Lincoln, in an image that encapsulates the love he had for his grandchildren. (Photo Courtesy of Mollie Brown)

“My youngest son James (6 months) would have met my dad for the first time this Christmas,” said Brown. “He loved sending the boys gifts and was looking forward to his trip.”

Strain was born in Illinois on October 24th, 1949; soon thereafter his family moved to Oakland. He attended Piedmont High School, where he earned his letter jacket for being the team manager. Strain was unable to play any sports due to a lifelong limp brought on by cerebral palsy.

Strain earned his bachelor’s degree at Brigham Young University and his masters at Canterbury, returning to Oakland with laurels to his name to pursue a career as a journalist.

“His love for the Bay Area called him home,” recalled Brown. “He spent the rest of his life working all over the Bay.”

Strain was a writer at the Oakland Tribune for over 20 years, before making his way to the Peralta Community College District as a journalism instructor and an influential mentor.

Strain served as an adjunct faculty member in the journalism department as well as the sports information officer for Laney College. For years, Strain was the voice of Eagles baseball, and at home games he could always be found stationed behind the field in the broadcasting booth.

John Beam, head coach of the Laney football team, spoke about Strain’s impact on Laney sports over the decades. He was at every home game and nearly every away game, even after leaving teaching last year. When the Eagles won the CCCAA State Football Championship in 2018, Strain was awarded a championship ring like the players.

“I didn’t even think twice about it,” Beam said. ”He’s been a part of Laney’s journey, he’s a part of our family. That’s what matters.”

Coach Beam praised Strain’s institutional memory, his deep-seated knowledge of sports, his big heart and highlighted his deeply held belief in the goodness of those around him: students, colleagues and athletes alike.

Eva Hannan, a former student and sports writer for the Laney Tower, covered games alongside Strain in the booth at Laney.

“If it wasn’t for him, the quality of the sports [coverage] would have been a lot less,” said Hannan.

“He would be at my side at every game…and it really just helped me out and guided me through this whole process of becoming a journalist.”

Strain was the catalysing force behind many Peralta freshmen becoming student journalists. Many of these students went on to become editor-in-chief of the Laney Tower (now The Citizen) or land professional positions as reporters. Nearly every alumni of The Citizen had two things in common: their passion for reporting and that Scott Strain played an active role in cultivating this passion. 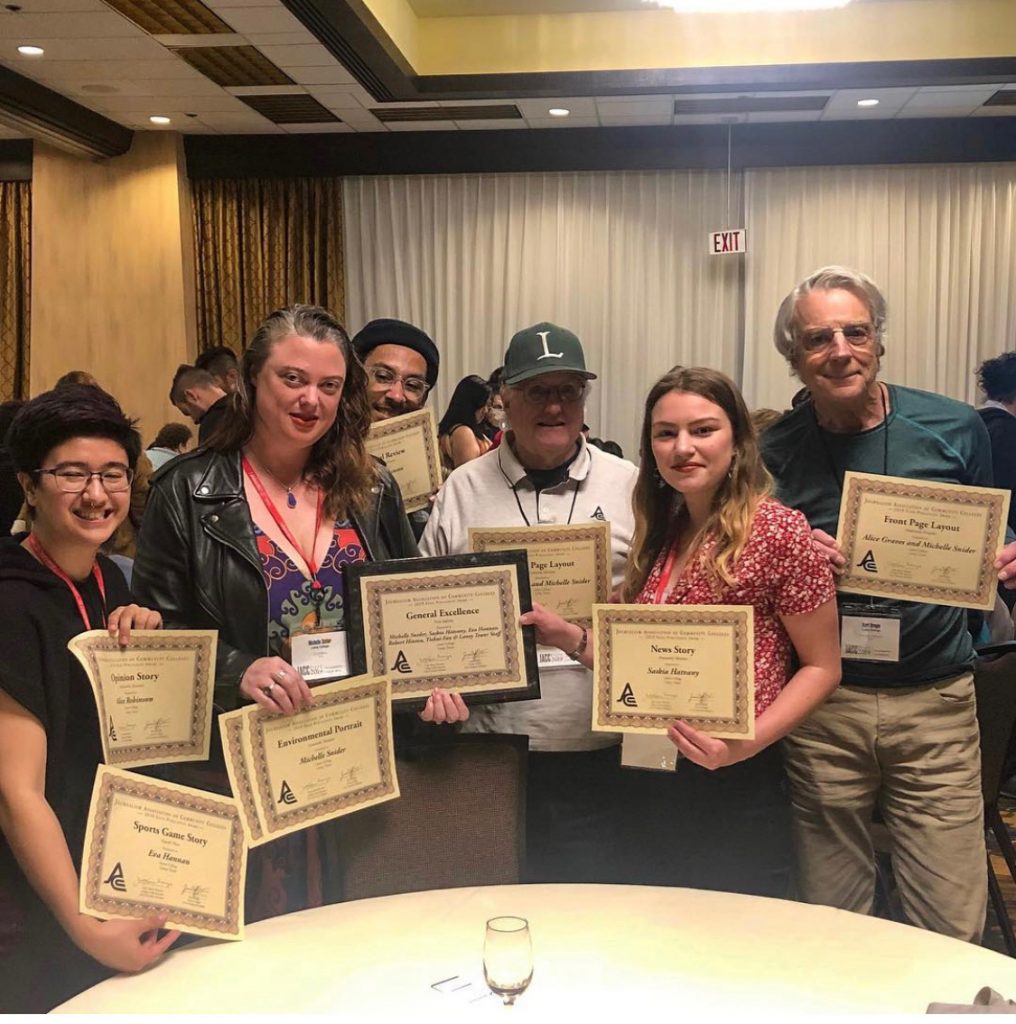 Michelle Snider, a Laney journalism student, expressed her gratitude for Strain sharing a memory from her first semester at Laney. Enrolled in Strain’s Social Media for Journalists class, Snider went “viral” for recording the infamous BBQ Becky video. Snider recalls the recognition and humor that she received from Strain over the incident fondly.

“As soon as I came to class, I just remember Scott with this big, great smile, and he’s like, ‘do you have something you need to tell me?’” Snider said.

“He had me do a presentation on BBQ Becky for his class, two semesters in a row which made me laugh…he loved the memes and it really fascinated him. It floored him, and he was so proud that one of his students did that.”

Saskia Hatvany, another former student of Strain, said he could always inspire a sense of excitement and passion for the work of student writers.

“He really loved journalism. He loved what he did. He loved being a teacher,” Hatvany said.

“He was never in a bad mood, which is something I don’t think I ever realized at the time. That really shines through and I think that was his value as a teacher, how enthusiastic and encouraging he was.”

Another former Peralta student journalist, Isis Piccillo, was a member of Strain’s newswriting class. They said his creativity with developing headlines was amongst the many assets he brought to the newsroom.

“He was a whiz at coming up with headlines that would perfectly fit the allotted space (this was back when we were printing!), and he was even more pleased when he could sneak in a pun,” Piccillo said.

Strain could be seen setting up signs around campus, running the recruitment table on the quad and talking to potential and beginning student reporters wherever he could.

“Enrollment was always a struggle,” noted former journalism department chair, Burt Dragin. “We always had to go out and really recruit and he would put up signs and do all kinds of things.”

“[Scott] was the first to volunteer and it paid off,” added Dragin. “It was very, very helpful in keeping the department going.”

Strain is survived by his daughter Mollie Brown, two grandsons Lincoln and James, and will be remembered as a dear friend, dedicated instructor and lifelong journalist. He leaves behind a legacy of kindness in his family and students at Laney College that will continue to ripple out into the foreseeable future. 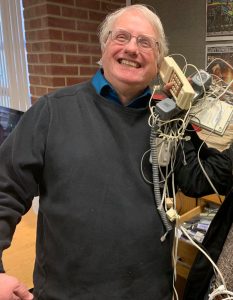 Scott Strain poses with a handful of old wires and corded telephones at the Laney Tower newsroom in Oakland, CA. (Photo Courtesy of Michelle Snider)

Words from the writers of this story,

I’ll remember Scott for being a very easy going guy who always carried a smile around Laney. As a student of his, I valued his patience and tolerance with my everlasting battles fighting perfectionism. He taught me how to create hilarious headlines that I wouldn’t have ever thought of using in an article, and how to use a Twitter account in his social media for journalists class. I find it poetic that Luke and I are the two writing this article for Scott. We were in his final newswriting class and are two of his last students. It was a privilege to have known him.

I met Scott Strain in my first semester at Laney. I didn’t know what I was doing or really why I was there, I just felt that I should be. Scott’s enthusiasm for journalism and the ocean of experience he so clearly carried with him struck me out of my stupor and back to my seat, class after class. Scott so clearly cared about newswriting and it made his students want to care as well. The fundamentals he taught me have become staples of how I approach the work I produce today, two years later. Through writing this memorial, I’ve learned just how dynamic and impressive of a person he was. Everyone had a story about how Scott had brought light or a new direction into their lives, and I include myself in that group. I’m proud to have known him; he will be missed. 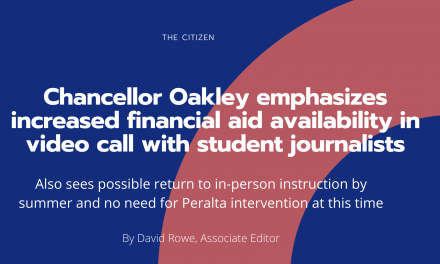 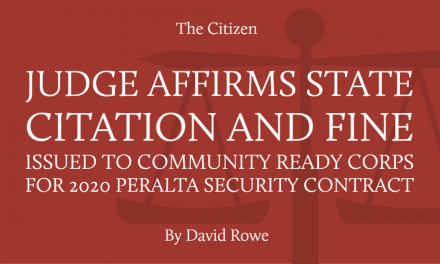 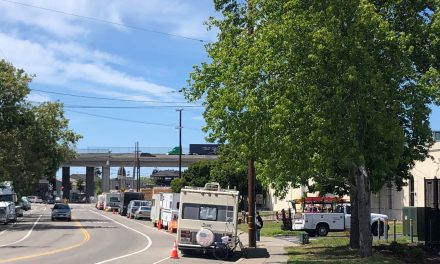 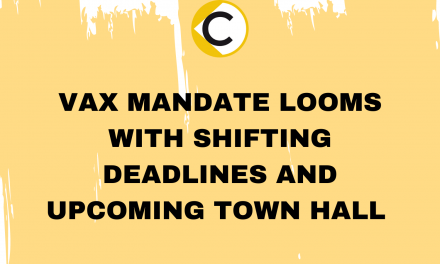