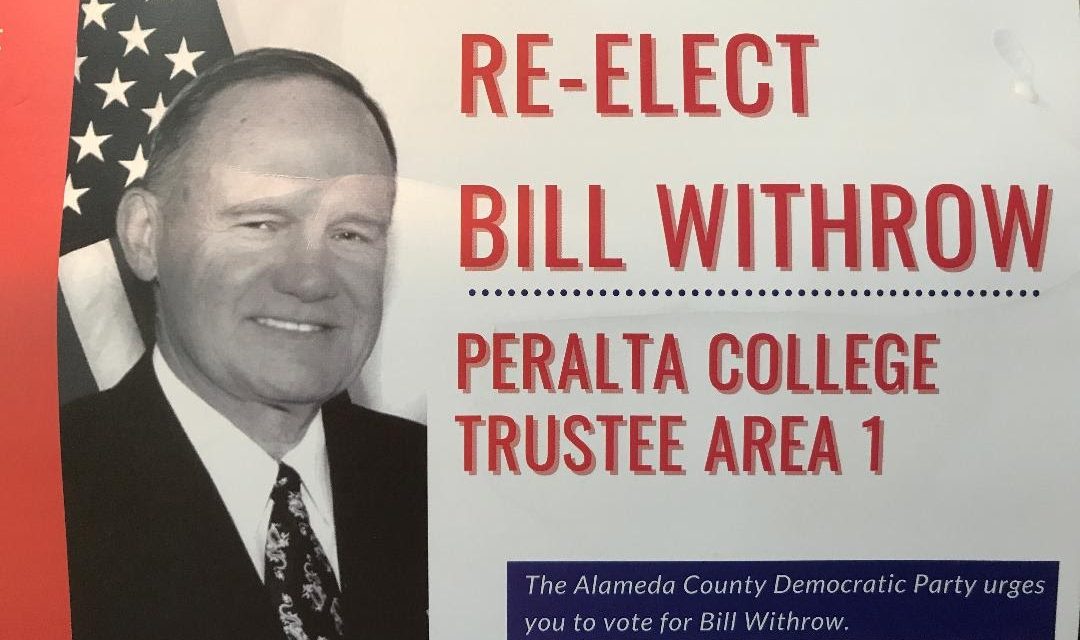 Peralta Trustee Bill Withrow handily defeated challenger Jeff Heyman to retain the Area 1 seat on the Peralta board of trustees. Area 1 includes the city of Alameda and a small part of Oakland.

Incumbent Bill Withrow easily won reelection for the Area 1 seat on the Peralta board of trustees by virtue of his high name recognition in Alameda and tactics such as this campaign mailer.

With 100 percent of precincts counted on November 4, Withrow leads Heyman by 3,007 votes out of a total of 19,248 votes counted, according to AC Vote, the official election site of Alameda County. Withrow received 57.6 percent of the votes compared to 41.98 percent for Heyman. There were 81 write-in votes representing the remaining 0.42 percent.

This was the only contested race for the Peralta board of trustees. Heyman was a last-minute entry, filing a day before the August 7 deadline. Withrow, a former mayor of Alameda, had not faced an opponent for his seat since his initial campaign in 2004. As previously reported in The Citizen, Withrow attempted to persuade Heyman to withdraw from the race in exchange for a chairmanship of a special committee.

In a phone conversation with The Citizen on Wednesday, Withrow extended thanks to his friends, colleagues, and family “who meant a great deal” in his successful reelection bid. He and Heyman had what Withrow described as “a cordial phone call” after the results were announced. Withrow reiterated his pride in being associated with the Peralta district and his strong feelings about the importance of education, particularly the type provided by community colleges, which he believes are more important than ever.

Challenger Jeff Heyman, former Executive Director of Public Information, Communications & Media for the Peralta district, did not accept outside donations and had to rely on guerilla tactics such as social media posts and yard signs. (Source: Heyman4Students Facebook page)

Heyman’s decision not to accept outside contributions made the task of defeating an entrenched incumbent with high name recognition even more difficult. Withrow was able to send costly campaign mailers to registered voters, whereas Heyman was limited to low-budget tactics, such as posting on social media and waving signs at passing motorists near busy intersections.

Heyman conceded the race via Facebook, Tuesday evening. He thanked his supporters and encouraged them to “keep up the struggle for teaching and learning.” In a subsequent text message to The Citizen, Heyman characterized his campaign as ”a great experience” and expressed hope that he “shed light on some of the issues facing Peralta.”

Withrow has not yet met Kevin Jenkins or Dyana Delfín Polk, the two newly-elected board members, but plans to reach out to them soon.

Board of Trustees Meeting Video Brief!