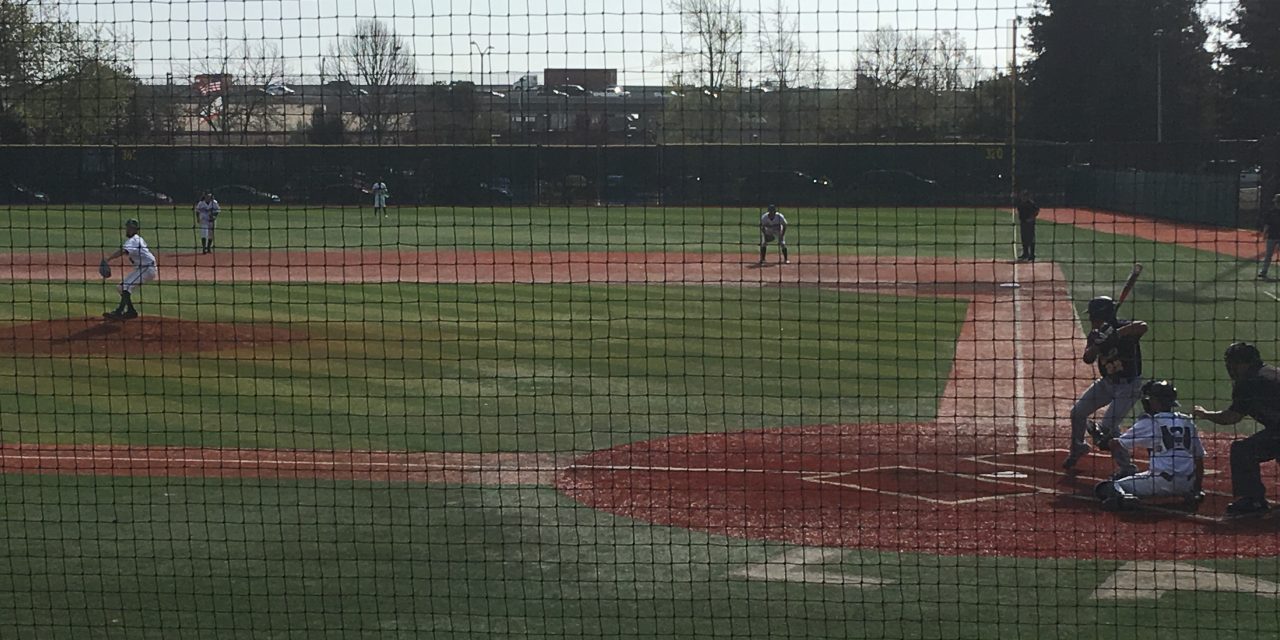 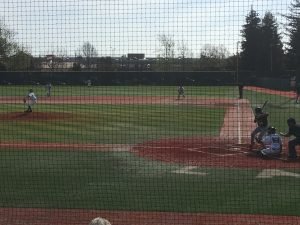 Tony Chiodo winds up for a pitch in the second inning against the Mendocino Eagles. Photo by James Millett

The afternoon sun had cut away the gray morning clouds, and clear blue sky blanketed the Laney Eagle baseball diamond. There was no denying spring was arriving on a cool breeze as Laney faced off against Mendocino College Thursday afternoon, March 5.

The top of the first inning saw Tony Chiodo lead the Eagles from the pitcher’s mound. Chiodo struggled to find his rhythm and hit Mendocino first baseman Logan Barrick on the calf, allowing a base runner. Mendocino scored one run, batted in from catcher Dereck Lafferriere.

Laney tied the score 1-1 in the second inning after Rudolph McDowell hit a triple and was subsequently brought home after a hit from Flynn Morrison.

Neither team scored runs in the fourth inning. Pitcher Chiodo fell apart in the fifth inning after giving a leadoff base hit to Alex Vargas. Jacob Monday then hit a double, which placed runners at 2nd and 3rd. Mendocino’s Jake Vigil hit a double of his own to bring in two runs and shortened Laney’s lead to one run. Conor Sterritt relieved Choido for the last out of the inning and stopped Mendocino from scoring further.

Sterritt struggled in the sixth inning, allowing Mendocino once again to load the bases. He was saved by a double play at second base, preventing Mendocino from tying the game. Sterritt was relieved on the mound by Ochoa at the end of the inning.

Ochoa delivered again in the bottom of the seventh inning, hitting a home run for Laney with two outs on the board, cushioning Laney’s lead at 5-3.

In the top of the eighth inning, Ochoa allowed a beautiful double from Mendocino catcher Preston Mello. Mello managed to put it in a hole just to the right of center field. Mendocino then put the tying runs on base, only to leave them stranded as Laney toughened its defense.

Laney stopped Mendocino 1-2-3 at the top of the ninth, ending the game at 5-3.  Mendocino scored three runs, had eight hits, and made two errors. Laney had five runs with seven hits and made zero errors. 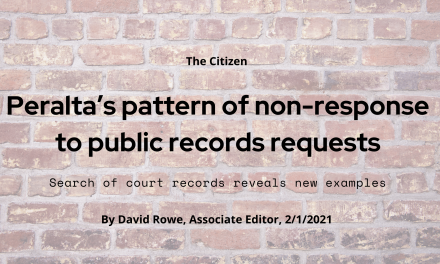 Part-timers issue taken to board

Letters to the Editor — Overwhelmed by overcrowding