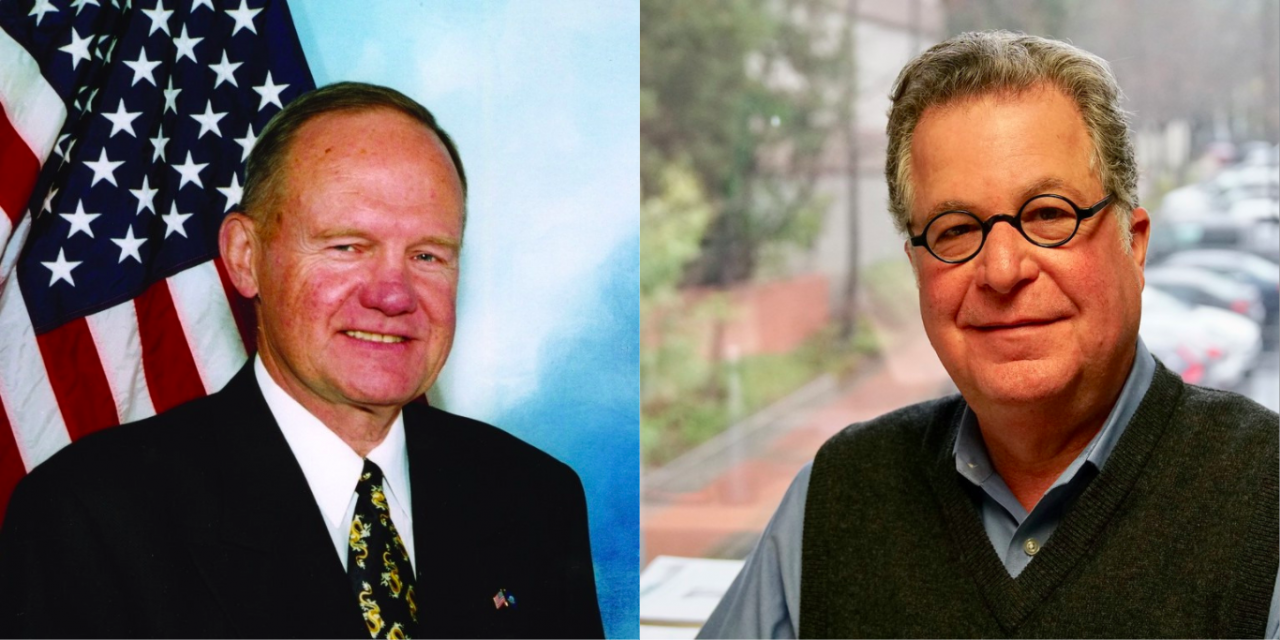 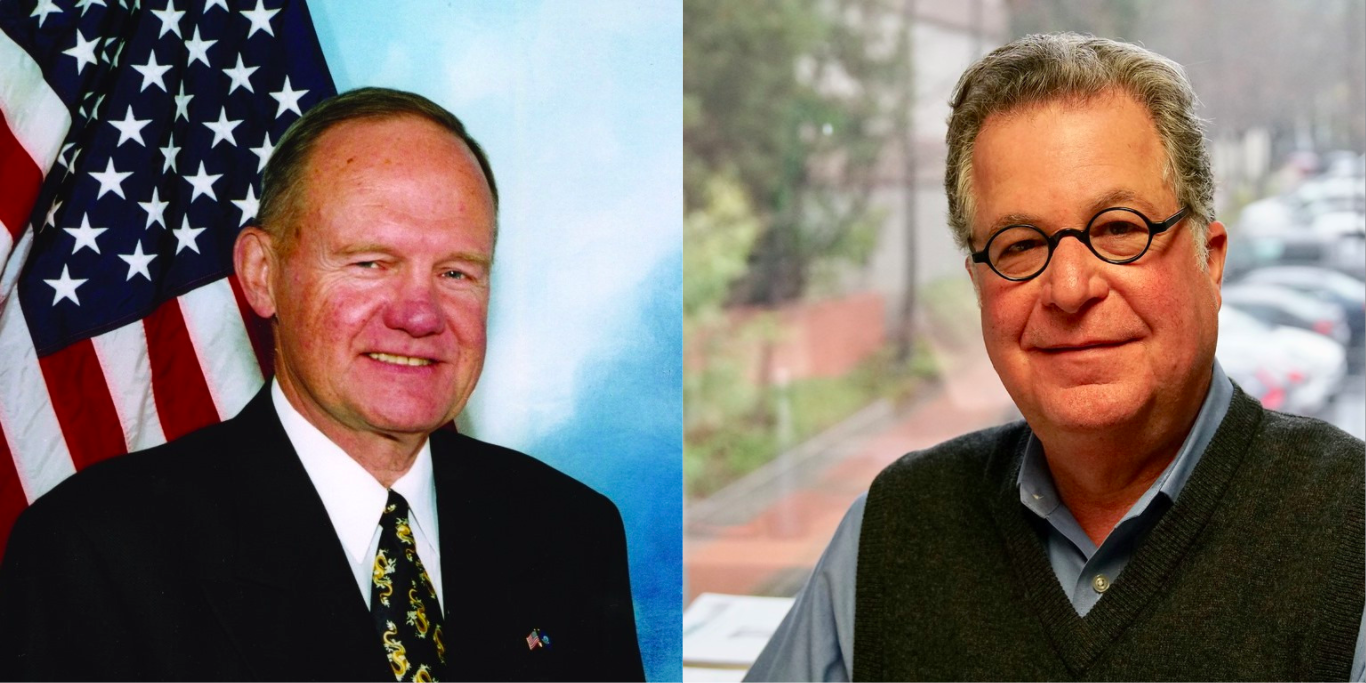 Bill Withrow, left, has served on the Peralta Community College District Board of Trustees for the last 15 years. His opponent, Jeff Heyman, is a former Peralta employee and is the first person to challenge Withrow for the Area 1 seat since Withrow’s debut at Peralta in 2004. (billwithrow4trustee.com and heyman4students.com)

The race for the Area 1 seat on the Peralta Community College District Board of Trustees has become unusually combative with both candidates exchanging allegations in exclusive interviews with The Citizen.

Bill Withrow, the 83-year-old incumbent, has held the Area 1 seat — which includes Alameda and a portion of Oakland — for the past 15 years. With a background in business, Withrow served one term as mayor of Alameda from 1991-1994. He has not faced an opponent for the trustee seat since his initial run in 2004 — but a day before the filing cutoff for the seat, former Peralta Executive Director of Public Information, Communications & Media Jeff Heyman decided to challenge Withrow. The two candidates were interviewed via Zoom about their history with the district and how they plan to represent voters if elected.

Withrow said his opponent, Jeff Heyman, “did not do a very good job” in the Peralta public information office. Withrow further accused Heyman of filing “an inflammatory ‘whistleblower’ statement” shortly before his departure from Peralta in retaliation for being placed on “probation” by former Chancellor Jowel Laguerre.

Heyman, now a 61-year-old Communication Analyst for the City of Lafayette, addressed the claims in an email to The Citizen.

“Bill should probably check his facts. I have never been placed on probation during my over 18 years with the district. I did receive a poor evaluation, with an overall assessment of ‘conditional retention’ on June 30, 2017, just about a month after I filed the whistleblower complaint. I took it as a form of retaliation,” Heyman said.

Heyman also pointed to positive performance reviews he received from the previous five Peralta chancellors and a special resolution presented to him by the board as evidence of his strong contributions to the district, and claimed responsibility for a 25% increase in enrollment as a result of his marketing efforts.

Heyman said that Withrow attempted to persuade him to drop out of the race in early August. In a phone call on August 7, one day after Heyman filed his papers, Withrow allegedly offered Heyman the chairmanship of a special committee on enrollment if he agreed to withdraw his candidacy. This call was confirmed by Withrow, who described the offer as “an informal committee within Alameda to get the word out with respect to what we have to offer at Peralta.” When asked if the offer was contingent on Heyman dropping out of the race, Withrow replied: “I believe that to be a valid assumption.”

Heyman said Withrow also offered to retire early from his next four-year term and appoint him as interim trustee with the approval of the board. Withrow denied this portion of the discussion happened and called it “goofy.”

Heyman said the resignation of former Peralta Chancellor Regina Stanback Stoud on July 16 was the deciding factor in his decision to run for the Peralta Board of Trustees. Heyman believes the accusations Stanback Stroud included in her widely publicized letter of resignation validate many of the concerns he raised in his whistleblower complaint.

Withrow said he was “devastated” by Stanback Stroud’s resignation and “has a great deal of respect” for her. She is listed on his campaign website as a supporter.

In an unusual move, Heyman is not accepting any campaign donations and has pledged to not accept his monthly trustee stipend of approximately $1,000. Heyman said that if all the trustees followed his example, a total of $84,000 a year could be saved which could pay for a teacher’s salary.

When asked if he would do the same during a candidates forum conducted by The Citizen on September 23, Withrow said he definitely will not give up the stipend. Choosing to make such a move could put undue pressure on other board members, who might not have the financial freedom to make such a decision, Withrow said.

“We are basically volunteers,” Withrow explained.

Both candidates acknowledged that virtual instruction has been a challenge. Withrow pointed out that nearly one-third of Peralta students are enrolled in technical education classes or nursing programs that better lend themselves to in-person instruction. Withrow said the health and safety of the students, faculty, and staff must be Peralta’s highest priority, but should not be “an excuse to deteriorate the quality of education.”

The Citizen confirmed with Mark Johnson, Peralta’s executive director of marketing, communication & public relations, that face-to-face nursing classes are not being offered this semester.  Johnson confirmed that some lab-based science classes, such as bio-science, are offering in-person instruction.

Heyman is also concerned about the use of virtual instruction for vocational education and the “digital divide” that impacts lower-income students who cannot afford the necessary computers and high-speed internet connections.

The two candidates also differ on the recent decision to move Peralta away from the contract with the Alameda County Sheriff’s Office (ACSO).

Withrow voted in favor of cancelation on June 23 and considers himself to be a “strong advocate of community policing.” As a retired US Navy Captain with 24 years of service, Withrow opposes “pushing the police into a paramilitary role” and believes their function needs to extend beyond simple law enforcement to address such issues as mental health.

When it comes to the ASCO contract, Heyman said he is undecided but remembers when Peralta had its own police force in the 1990s. After Lt. Herbert Stovall was killed by a suspected auto burglar on the Laney campus in August 1995, Peralta decided it could not provide adequate training or resources and police services were turned over to ASCO.

Heyman believes his “on the ground experience” differentiates him from the incumbent. Unlike other trustees, he has been an instructor, and co-taught a journalism class at Laney College from 2013-2018. According to Heyman, this experience provides him with a unique perspective on the challenges facing both the faculty and students.

He also contends that his experience at Kroll, a firm involved in corporate security and investigative matters, will make him a better “steward [of] the district’s money.”

Withrow believes his business background — including his MBA degree from Harvard University, and his investment banking career at Wells Fargo Securities — enable him to better address the financial issues facing Peralta. He said the district is making progress on the financial front and is working closely with Jim Austin, the state-appointed fiscal monitor, who he describes as a “rational, intelligent gentleman” who “understands what is going on.” Withrow discounted the possibility of a state takeover and believes the district will be financially solvent for the foreseeable future.

Both candidates are in favor of Proposition 15 on the November ballot that would restructure taxes on business and result in more funding for community colleges. They also share a concern that the current economic slump may impact the Peralta district more than most.

“When California gets a cold, the Peralta district gets the flu,” Heyman said.

Both candidates also know how to keep their cool under fire. Bill Withrow commanded a guided missile cruiser in the US Navy. Jeff Heyman was the target of snipers in Sarajevo, Bosnia where he served as a United Nations Information Officer.

“They do a lot of sniping at Peralta. They just don’t use live ammo,” Heyman said, seemingly comparing his wartime experience to the district’s political climate.

If recent events are any indication, a cease-fire between the candidates before the election is unlikely.

Heyman and Withrow will face off on Thursday, October 1, in an online candidate forum sponsored by the League of Women Voters of Oakland starting at 6 p.m.  Anyone interested can register here.

To learn more about the candidates, visit their websites:

‘Torres not only teaches the part, he acts the part’