Stanback Stroud says she experienced “harassment” in letter to board 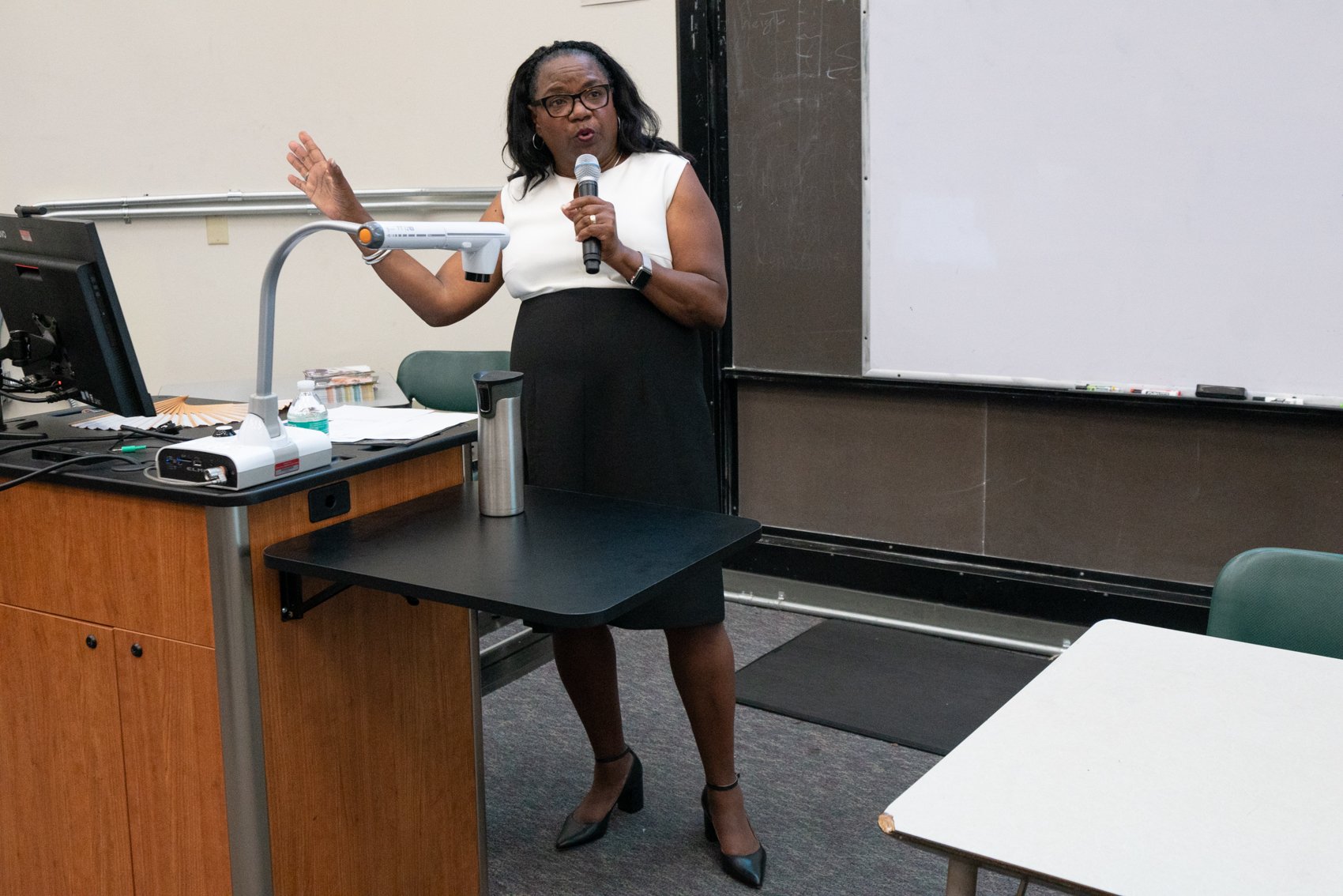 Regina Stanback Stroud addresses community members during a forum when she was being considered for the position of Peralta Community College District chancellor in Sept. 2019. (Michelle Snider/The Citizen)

Peralta Community College District Chancellor Regina Stanback Stroud announced her resignation to the Peralta Board of Trustees via email on July 16.

In the notice, Stanback Stroud listed “extensive progress” made by the district during her time as chancellor, but also provided a bulleted list of problems that led to her resignation, effective August 15. Her allegations included “violations of confidentiality,” “collusion with unions,” and “interference with fair and effective hiring practices.” Stanback Stroud also wrote that the board exhibited hostility toward Black executive staff, and that she experienced harassment “to the extent that it creates emotional distress beyond that which is bearable or should be tolerated.”

On July 17, the board of trustees announced a special meeting for Saturday, July 18, with public comment at 11 a.m. To sign up for public comment, speakers should email Board Clerk Brenda Martinez at [email protected]. The closed-session agenda items include an evaluation of the chancellor and public employee “discipline/dismissal/release.”

Formerly president of Skyline College in San Mateo County, Stanback Stroud joined the Peralta district following her July 2019 retirement. Since Stanback Stroud assumed the position in October 2019, the district has faced significant changes and circumstances: four college presidents left Peralta to join other districts, the accreditation commission placed all four colleges on probation, and the district shifted online to accommodate shelter-in-place orders in response to the coronavirus.

When Stanback Stroud was hired, Board of Trustees President Julina Bonilla described her as “an innovative force for student equity and diversity.” In June, the board adopted a resolution affirming Peralta’s commitment to student success for Black students upon Stanback Stroud’s recommendation.

When Stanback Stroud joined the district, she addressed Peralta’s “critical” FCMAT (fiscal crisis and management assistance team) report, and said that she was “confident that with leadership, commitment, and political will we can steer the district to financial stability.” At the May 19 board of governors meeting, Stanback Stroud reported progress in addressing the fiscal recommendations in the FCMAT report, and claimed that the district had significantly reduced its fiscal risk score. During the meeting, the board of governors commended Stanback Stroud’s efforts, but concerns about “continued hostility” in governance were repeatedly referenced. California Community College Chancellor Eloy Ortiz Oakley also warned that he was considering assigning a special trustee to the district, which could replace the elected Peralta Board of Trustees.

Before Stanback Stroud announced her resignation, the trustees sent a report to Oakley and the board of governors on July 16. The trustees responded to several concerns regarding friction between the chancellor and the board, including the bounds of the chancellor’s role and interference with the chancellor’s ability to execute their role. The report denied violating the board’s scope of authority and also repeatedly asked for evidence of the concerns expressed.

Oakley had previously assigned the district a monitor because of the FCMAT findings. In the letter responding to concerns raised at the board of governors meeting, trustees wrote that the monitor “created a wedge between the board and the administration.”

Stanback Stroud met pushback from faculty when she restricted district-wide access to the FAS email listserv in April, citing antiquated technology and a vitriolic culture. Faculty claimed the action restrained free speech and “created havoc” in the district. On this occasion and others, Peralta community members have raised concerns about being excluded from administrative decisions that merited shared governance.

Stanback Stroud’s departure comes as the district enters a critical fall semester. In November, Peralta is expected to present a fiscal recovery plan to the ACCJC, and four seats on the board of trustees will be up for election. Meanwhile, the colleges continue to teach only in remote formats, planning and construction of several new facilities are underway, and the district is developing a new security plan — all while the search for a new chancellor will be prioritized.

In the meantime, the board will develop a succession plan, and an interim chancellor will be appointed, according to Board Policy 2432.

On July 17, a joint statement from the board of trustees and Stanback Stroud was circulated to the Peralta community.

“We want to assure everyone in the Peralta Community that our organization is strong,” they wrote. “While this situation is not ideal, there is no doubt that we will continue to serve students and our community with dedication and compassion.”

Laney ready to dial up the Wi-Fi

Is this a real gun?